Rhys Dyer, CEO of ooba, says: “Local residential property prices have experienced four tough years of flat to negative real growth. Property price growth in 2020 is expected to perform in line with 2019 levels. We anticipate nominal growth in the Average Purchase Price of between 3.5% and 4% for the year ahead, largely tracking inflation.

“Prospects for the residential property market during 2020 will be directly influenced by the ability for SA Inc. to ramp up economic growth. This year presents a key fork in the road for the economy. A ratings downgrade seems increasingly possible, exacerbated by the ongoing challenges facing almost all State-Owned Enterprises, particularly Eskom. The economy needs urgent and decisive action from policymakers to ensure much-needed stronger economic growth,” adds Dyer.

Looking ahead, Dyer expects that the four key drivers of performance in the 2020 residential property market will be softer interest rates, improved property affordability, the banks’ favourable lending appetite and consumer confidence.

“The decision by the Reserve Bank this month to cut interest rates by 25 basis points will assist home buyers to meet their home loan and other debt repayments and will generate much-needed consumer relief, which hopefully translates into improved consumer confidence,” says Dyer. “Currently inflation is well within the 3% to 6% target range and this, coupled with the recent Rand strength, we expect will result in the Reserve Bank dropping interest rates further during the course of 2020,” predicts Dyer.

Says Dyer: “We envisage that local banks will continue to offer favourable mortgage finance terms during 2020, similar to levels experienced in 2019. Banks are also increasingly granting loans of 100% and more of the purchase price to all homebuyers, not just first-time buyers. This will have a positive effect on liquidity in the property market and will, in particular, encourage more first-time buyers to enter the market.”

Dyer believes first-time buyers will make up a greater portion of total homebuyers in 2020 as they take advantage of lower interest rates, availability of finance and relatively cheaper property prices. This will result in the lower end of the market performing better than the upper end.

The top end of the market will likely remain subdued until much better news on economic growth and consumer confidence comes through, which is unlikely to occur to any large degree during 2020. As always, there will be pockets of stronger growth in certain suburbs, as well as higher demand and prices for energy-efficient smaller properties that are close to transport nodes and central business districts.

“Given the bumpy economic road ahead, it is advisable for property buyers to shop around for the most competitive home loan. Potential homebuyers should make use of ooba’s free affordability assessment to ensure they shop for a property that is within their means. By using ooba’s home loan comparison service, buyers benefit from having multiple home loan offers, allowing them to select the most advantageous home loan terms,” concludes Dyer. 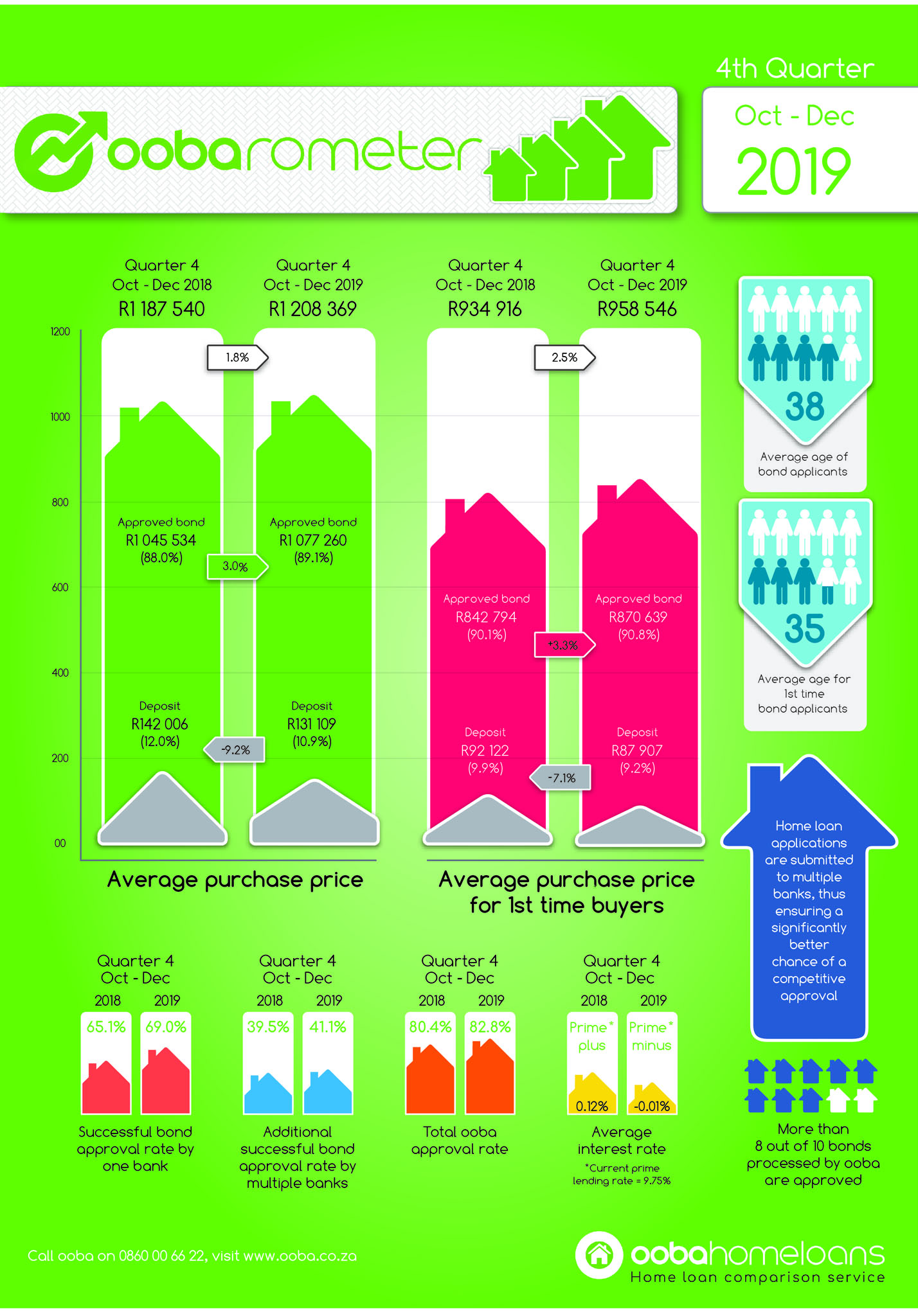 How much can you afford?

Calculate the home loan you are likely to qualify for and how much you can expect to pay monthly on your bond repayments.

Please note that this increase will retroactively effect VAT-inclusive calculations in articles contained in our website.